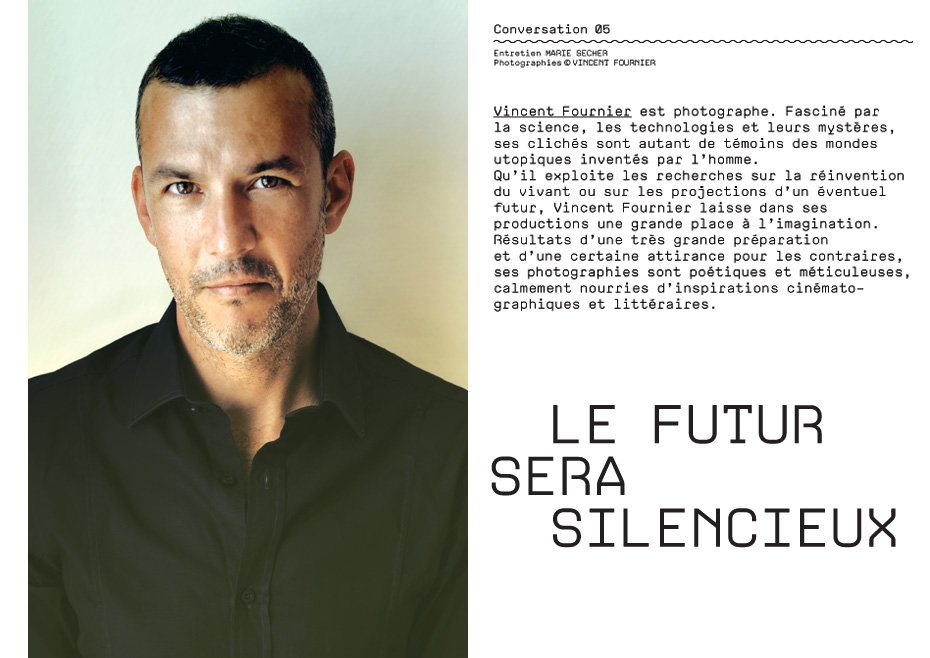 THE FUTURE WILL BE SILENT

THE FUTURE WILL BE SILENT

Mister Fournier, first things first: what is your background?

I first studied Cinema and Sociology at the University of Montpellier where I Graduated Sociology and Mastered Visual Arts. Then, I obtained the diploma in the Arles-based Ecole Nationale Supérieure de la Photographie.

How do you proceed at work? How are your projects initiated?

I don’t really have a proper methodology, I just try to «feed my garden» as everyone else. Actually, I don’t believe that one can really explain how artistic projects are initiated, and well, I think it is better this way.

There are obvious references to movies in your own directing and lighting. What is your reference work? You have mentioned Cronenberg, Tati, who else?

Indeed, I have made numerous film industry references along my work. David Cronenberg as you mentioned, or Stanley Kubrick are amongst those directors who had such an influence on me because of their technological approach and the forward-thinking aspect of their work. Solaris by Andrei Tarkovsky also fascinated me and one can easily see this movie together with 2001, Space Odyssey as heads and tails. Both movies show the cosmic sphere as the reflection of intimacy and both directors actually question our perception of reality with unexpected spaces –always imagined rather than real – or time incoherencies, such as the final of 2001, Space Odyssey, where you can see an astronaut evolving in a Louis XVI decor.

I also like Jacques Tati’s movies because his sense of humour has always been very close to absurd, because his vision of utopias was far in advance from his time even though it was also often satirical and of course because of his esthetical approach.

We can see in your last project named Post Natural History hybrid insects, half-alive half-mechanical. You seem to enjoy creating new hybrid «breeds», like those in the Island of Dr. Moreau, don’t you? Is it your personal interpretation of a hypothetic future?

Yes, I like the idea of creating new species that could possibly exist in the future. And your mentioning Dr Moreau is very interesting. The newest technologies are mixing living forms with synthetical biology, cybernetics or nanotechnologies… The image of the crazy old-fashioned scientist, as Frankenstein or Dr. Jeckyll is popping-up again but under a new form. Our fear in the progress of sciences and technologies is not coming from isolated individuals as those poor spectres and scapegoats we used to be depicted. No, this fear is now coming from gigantic groups, which are dealing with sciences and economy altogether. Danger is not pyramidal anymore: it is sprawling instead. There is no “Big Brother” and nothing is under control anymore. We could reward anyway these crazy old-fashioned scientists for they have questioned the limits of our humanity and because they brought us a vision of what could happen.

Indeed, science fiction is often seen as the reflection of an age, of a vision but also of a current situation at a given time. As a matter of fact, we can find this idea in your work Brasilia. Do you think that science fiction is similar to this town, an utopia which will never exist under the considered form?

Brasilia depicts the future of an era, which never happened. In that way, it is a true ruin of a future. It was also at that time, during the sixties, that the idea of the future has been more common. This dream of a potential future was federating our collective imagination. Consider the time when the first man reached the Moon in 1969: suddenly, the dream of millions of people became true! But it seems now that there are less representations of our future. I think we are only interested in what is current, instantaneous and immediate. Maybe have we been disappointed at some point. But we should also start the dream machinery again! Imagining a future can bring new perspectives. Being bored is dreadful.

You gave to your work piece Space Project a dimension almost oniric, quite surrealistic. Was it made on purpose since creation or has it appeared during production phasis? And did you realise a dream of yours as a child in this particular project?

I find it very hard to explain my artistic work and sometimes it can even breach its mystery, which I believe is a tremendous part of artistic creation. Actually, I try to relax, remove things from my mind in order to let other things pop up and in the same time I remain very cautious about the pattern, the rigor of the composition, the quality of light, and the matching of colours… I am looking for a balance between historic reality and what remains of my dreams as a child. That’s the reason why my pictures are showing troubled situation, improbable or sometimes incoherent.

What we noted in your work is the quite systematic fight between what you name «opposite couples», such as living form vs mechanics, current vs future, ordinary vs extraordinary and so on. Is future necessarily opposite to current? And is it from this contradiction that fiction emerges?

Yes, it is the secret harmony of the opposed forces as described in Heraclitus of Ephesus’ philosophy. The conflict between the contraries is actually what brings life to the universe but also results in harmony. I am completely fascinated by these hidden and mysterious balances. They create a paradoxical tension and an aesthetic of the bizarre that we can illustrate with this quotation from the Comte de Lautréamont: “beautiful as the unexpected meeting over a dissection table of a sewing machine with an umbrella.”

You seem to have had a very clinical approach in your work: could you explain in which proportion your pictures are the reflection of your thoughts about the humankind’s future?

I think that what you describe as a “clinical approach” is nothing more than my esthetical choices. I have been deeply influenced by “rationalist” compositions, such as the grids used by architects or graphic designers. As many other photographs or artists, I have been very inspired by the frame used in Tati’s Play Time, in particular because of its own architectural and pictorial influences.

Could you tell us how deep your work has been influenced by the whole pictorial universe of science fiction (pulps, movies, film posters, covers of magazine, novels, etc.)?

The Pulp culture interests me very much because it reflects a singular context, but I am much more interested in ideas brought by science fiction than in science fiction itself. A radio broadcast such as this one-hour French talk show “Sur les épaules de Darwin” on France Inter, had a deep influence on my work, for instance. What a talented man Jean-Claude Ameisen is! He knows exactly how to teach us and make us travel both at the same time. I also love the pictorial universe of both J.L. Borges and J.G. Ballard.

That’s interesting especially as the scientists seem to be reluctant to share their researches with science fiction experts… Did your work make them react in any manner?

I have an opposite impression. Scientists are influenced by science fiction themselves. Some inventions often come from an envy to realise a fantasy depicted in a science fiction work. These are the seeds one planted as a child and which germinate later… or not. As for the flying cars…

I also believe that if my work is somehow echoed in both artistic and science areas, it is mainly due to the fact that I bring a poetic interpretation to scientific current issues whose resolution may even be far advanced in labs. This relation between fantasy and reality has a paramount importance. My work would lose its underlying signification had it not been supported by this real aspect. Reaching the Moon was first dreamt of by hundreds of thousands of human beings before we turn this dream into this very successful scientific project we all know. That’s why I believe it must be taken very seriously to dream about our world.

Could you explain us how your project The Man Machine was initiated? How was your collaboration with robot research laboratories?

The Man Machine project is a reflection on how artificial creatures such as robots or other avatars can evolve in our day-to-day life. I started working on this in 2011 with the support of many labs specialised in humanoid robots. We are here in a “speculative fiction” which shows pictures of every ordinary days of a human being over a period but with a robot instead. My pictures are realistic reconstructions of usual domestic scenes: at work, at home, in the street, during free time, etc. Situations suggest empathy towards the robot but also a detachment from this robot both at the same time. My aim was to create a balance between the spectator and the robot, between the self-identification process and the detachment one.

This idea can also be found in the scientific theory of the “Uncanny Valley” elaborated by the famous Japanese roboticist Masahiro Mori which states that the more similar a robot is to a human the more important is our focus on its imperfections. The current development of these artificial creatures in our society brings the fascinating but also frightening issue of the social acceptance of these changes.

You first used video media in your The Man Machine work. Do photography remains your favourite media though?

Of course, I am a photographer above all else, and I sometimes direct films or make “sculptures” with the 3D printing techniques.

What are you currently working on?

Well, I am on Archaeology of the Future, which shows a collection of ten “flowered skeletons” made with the 3D printing techniques that we just mentioned. It is the result of botanical researches made on the synthesising of flower “flesh” from various stem cells. These hybrid plants are grown up in labs and produce an edible flesh, which is also very rich in proteins.

I consider it very esthetical but to a certain extent: it is frankly frightening when you think that before ending up as bones, these flowers were made of a synthetic flesh elaborated from tissue engineering techniques, isn’t it?

This project basically echoes current research made on the in-vitro meat culture for which we can easily understand the immediate implications over our environment.

What do you expect to happen in the future?

The amazing acceleration of technologies of all sort and their convergence make me think that major steps will come very shortly. I think we are at the dawn of a “living” revolution, which may well result in a new hybrid world. Even a writer such as Michel Houellebecq who is far from science fiction literature, imagines the worse as a probable future in his book “The possibility of an island”. To quote the book “Black Swan” by Nassim Nicholas Taleb, History is neither necessarily linear nor progressive; it is sometimes very violently proceeded. Future is hopefully not the mirror of the past.